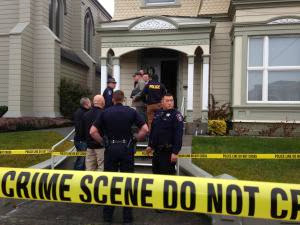 Mourners are gathering outside St. Bernard Church in Eureka, where the Rev. Eric Freed was found dead in the rectory this morning. The EPD confirms it is conducting a murder investigation. No suspect has been arrested.

◼ EPD says this is a murder investigation - ◼ News Channel 3 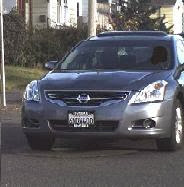 UPDATE: ◼ EPD Seeks Vehicle Thought To Be Related to Today’s Homicide The Eureka Police Department is seeking the publics assistance in locating a vehicle associated with the homicide, which occurred at St. Bernard’s Rectory on 1-1-2014. (images from Lost Coast Outpost)

Times-Standard
Update: The vehicle being sought in connection to the killing of St. Bernard Parish Pastor Eric Freed belonged to him.

EPD is seeking the public’s assistance in locating Freed’s vehicle, a gray Nissan Altima Hybrid, license plate 6NDW400. EPD Chief Andrew Mills said it’s unclear when the vehicle was last seen or if it was at St. Bernard Church prior to Freed’s death, but the department is warning anyone who may see the vehicle not to approach it and to instead call police.

According to Lt. Steve Knight of the Humboldt County Sheriff’s Department, the caretaker of the Sacred Heart Catholic Church on Myrtle was confronted by an intruder today inside the building today around 2 P.M. The woman stopped by to check on the grounds and spotted a bicycle inside the building.

She opened the door and went into the dark interior. A man, approximately 6 foot tall wearing dark clothing including a sweatshirt and a beanie or a hat, began to move towards her. She retreated behind another door and called 911. She was not injured or confronted further. The man fled left the scene and has not been found.

Lt. Knight said that there was nothing to indicate a connection with the murder of Fr. Eric Freed but neither is his office ruling out the possibility. Deputies have been asked to keep an eye on all churches at this time—”especially,” Knight said, the “Catholic churches.”

__________________
Note: There's good coverage of this - and other breaking news - at each of the news outlets above - if you're trying to get information, We recommend you follow them on Facebook, and bookmark their webpages. I linked their names to their Facebook pages, so just click there. The article links, of course, link to the articles on their webapges.