Trinidad artist, Kathrin Burleson, recently accompanied local WWII veteran Charles Moon to Washington D. C. to visit the WWII Memorial.  The trip was made through Honor Flight, a non-profit organization that is dedicated to taking WWII veterans to Washington to see and reflect at the Memorial that was built in their honor in 2004.

There is no cost to the veteran, and no government support of the program.  It is funded by donations of individuals and organizations, the staff are all volunteers.  Kathrin was one of thirteen guardians who accompanied the twenty six veterans on the October flight.

Kathrin is a member of Republican Women's Club, Daughters of the American Revolution, Trinidad Civic Club, and was recently elected to the Board of Directors of Honor Flight Northern California.

The program will include a short talk and slide show of the recent trip.  Charles Moon will be with us to share his experiences and answer questions.  Please invite friends and family and join us!

2011 brings us a sign of hope and new vitality and wishes for a Happy New Year!
It is exciting to begin January ushering in all victorious Republicans around the country and to Washington and see the stage set once again for promotion of conservative principles and logic.

The Constitution is read aloud!! This truly marks a great moment in time and may the younger generations pay attention to the “Word of the People” - the primary guide that keeps our nation the greatest on earth.

We must accept the responsibility to support our leaders diligently. And when we watch with care as coaches and umpires do in a football game, we will know exactly when to throw in the “Red and Yellow Flags”  to stop the action, contact them, rewind the misuse of power or money we entrusted them with, and hand out penalties when they are deemed.

We must “step in” and get out of our comfort zone to take our nation back to greatness. We can and will do it – even if we have to sleep with one eye open.    Debbie Walker
Email ThisBlogThis!Share to TwitterShare to FacebookShare to Pinterest

Humboldt County's Republican Central Committee for 2011-12 has held its first meeting and has subcommittees busy reviewing the by-laws, working on plans for the annual Republican of the Year dinner in spring and readying its new web site for launching.

New hours for Republican Headquarters are 10 a.m.- 4 p.m., Tuesdays, Wednesdays and Thursdays.
The telephone number is 442-2259.

If you would like to volunteer for a Headquarters shift, regularly or as a substitute from time to time, please call us.
Email ThisBlogThis!Share to TwitterShare to FacebookShare to Pinterest 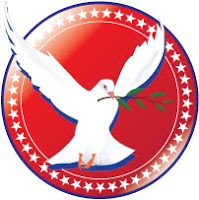 In recent years, many leftists ignore the fact that our nation was founded on Christian-Judeo principles. How can they dismiss what our founding Fathers have written and is part of our recorded history?

Here are just a couple of examples:
“Principally and first of all, I give and recommend my soul into the hands of God that gave it: and my body I recommend to the earth... nothing doubting but at the general resurrection I shall receive the same again by the mercy and power of God.”
John Hancock, signer of the Declaration of Independence

“It cannot be emphasized too clearly and too often that this nation was founded, not by religionists, but by Christians; not on religion, but on the gospel of Jesus Christ.”
Patrick Henry, while Governor of Virginia
Email ThisBlogThis!Share to TwitterShare to FacebookShare to Pinterest

◼ GOP-Controlled House Kicks Off New Session by Reading Constitution Aloud
Though it has been inserted as text into the Congressional Record before, the supreme law of the land has never been read aloud before in the body known as "the People's House."
The man responsible for the exercise, Rep. Bob Goodlatte, R-Va., says it's more than just a simple civics lesson.
"This is a very symbolic showing to the American people," said Goodlatte, "and it's a powerful message to members of Congress. We are a nation of laws, not of men."
◼ Have You Read the Constitution?
◼ READ the Constitution pdf
◼ Constitution reading provokes political tussling
Email ThisBlogThis!Share to TwitterShare to FacebookShare to Pinterest

◼ Video: The moment we’ve all been waiting for - HotAir
◼ Mr. Speaker - Legal Insurrection
Email ThisBlogThis!Share to TwitterShare to FacebookShare to Pinterest

...Glenn Beck’s expose on George Soros was met with horror and stinging attacks from the radical Left. Insiders understand that like most socialist plans, it’s best to fly below the radar. Glenn Beck’s big spotlight on Soros is troubling because of the powerful Washington political insiders that surround Soros and his ventures.

Essentially, the entire leftist wing of the Democrat party, including the President can be tied to George Soros in some way....
Email ThisBlogThis!Share to TwitterShare to FacebookShare to Pinterest

◼ The Dorothy Andrews Kabis Memorial Internship honors the former president of the NFRW (1963-67) who later was appointed U.S. treasurer by President Richard Nixon. The internship gives female undergraduates the opportunity to spend part of the summer working at national headquarters in Alexandria, Va. It includes a small monetary allowance, roundtrip airfare to and from Washington, D.C., and housing in the D.C. metropolitan area.

Applicants must be at least a junior in college or a college student 21 years of age or older. They should have a general knowledge of government, a keen interest in politics, campaign experience, and sufficient clerical office skills that are adaptable to a busy office. Internship recipients may not reapply. Deadline: Applications due to State Federation Presidents by FEBRUARY 20. Download application at the link.
Email ThisBlogThis!Share to TwitterShare to FacebookShare to Pinterest

The call rang out February 19, 2009, when Rick Santelli, a Chicago stock commentator, voiced his now famous rant over the bail out of delinquent mortgages. His “call” was for other outraged Americans to push back, against the moral and economic tyranny of big government, with the modern day equivalent of a Boston Tea Party.

Today our government rewards bad behavior at the expense of those who play by the rules, pay their taxes and live responsible lives. For decades a collective “we” allowed this assault to our civil liberties and family values, the growth of all levels of government and faceless regulation, and the theft of our property through monumental debt.

Overnight an electronic firestorm turned frustration into action as websites sprang up, emails swept the nation and self-proclaimed patriots began networking. The common denominator to this grassroots movement is liberty from government?s unconstitutional control over our lives. These patriots esteem the Constitution, demand smaller government, understand the importance of free markets, and expect fiscal responsibility. These values strike at the core of how they live their lives.

Russia watchers have been pondering for months: Will Putin run for president again in 2012, or won't he? The verdict in the case of Mikhail Khodorkovsky last week should settle it. Putin will run... read the rest

__________
(Note: Peter Hannaford is Chairman of the Humboldt Republican Central Committee. He is also a member of the Committee on the Present Danger. He closely associated with the late President Ronald Reagan. He is now working on a new book titled "Presidential Retreats.")

The story behind the "Star Spangled Banner"


This video allows us to thoroughly understand the meaning of the words in our National Anthem. Francis Scott Key wrote this from what he personally experienced and witnessed as the British enemy shelled Fort McHenry back to the stone age. Our soldiers, citizens would never give up. h/t: TR
Email ThisBlogThis!Share to TwitterShare to FacebookShare to Pinterest

◼ How to Break Bread With the Republicans NYT
1. Focus on the long run
2. Think at the margin
3. Stop trying to spread the wealth
4. Spread opportunity instead
5. Don't make the opposition your enemy
Email ThisBlogThis!Share to TwitterShare to FacebookShare to Pinterest

Some Taxpayers Must Wait to File Returns


The IRS said that it needs until mid- to late-February to reprogram its processing systems because Congress acted so late this year cleaning up the tax code. The bill, which includes deductions for state and local sales taxes, college tuition and teacher expenses, wasn't signed into law until Dec. 17.

The bill ensured that the federal income tax rates would not change, and itemized deductions will continue to be allowed in full for high-income taxpayers.

As a result, the 50 million taxpayers who itemize their deductions will have to hold off for a bit before they file. Of course, not everyone files early: only about 9 million of the 140 million U.S. tax filers filed in January or February of last year.

at 10:45 AM Labels: In the News, Taxes
Newer Posts Older Posts Home
Subscribe to: Posts (Atom)