Prop 68: CFRW recommends a NO vote 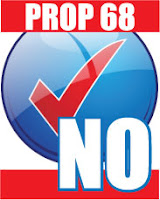