Join us for lunch: Meet the candidates for Superior Court Judge

Get to know your judicial candidates. Rarely do we have the opportunity to elect judges and this election affords the community a glimpse into the candidates and the office.

HRWF will host three judicial candidates in what is probably the candidates first official public appearance in their campaigns.

Come learn about their background, judicial responsibilities and philosophy. 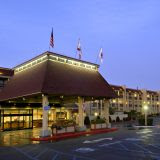 What does a turnover in judges mean for Humboldt? https://t.co/IfYjT6Cc3A pic.twitter.com/IhZuRIvrXK