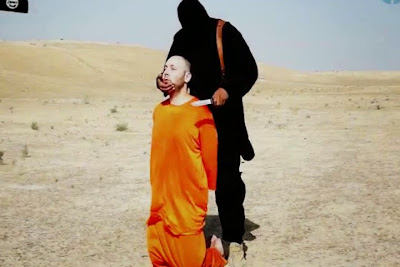 ◼ 'I'm back, Obama': ISIS executioner Jihadi John taunts President as he beheads second US journalist, Steven Sotloff . . . and then threatens to kill a Briton next - JAMES NYE FOR MAILONLINE

Steven Sotloff, 31, from Miami, was captured in Syria in August 2013
The video is titled ‘A Second Message to America’
In the video, Sotloff describes himself as 'paying the price' for the Obama administration’s decision to attack ISIS in Iraq
His execution follows the beheading of fellow Journalist James Foley last month
Sotloff freelanced for Time and Foreign Policy magazines
The White House today said: 'Our thoughts and prayers are with Mr Sotloff and Mr Sotloff's family’

White House Press Secretary Josh Earnest was taken by surprise when a reporter asked him about the video during a regular Tuesday press briefing.

The official said Haines, the British hostage shown in the #Sotloff video, has also likely been killed. http://t.co/mLCw1MveYj #ISIS #Iraq 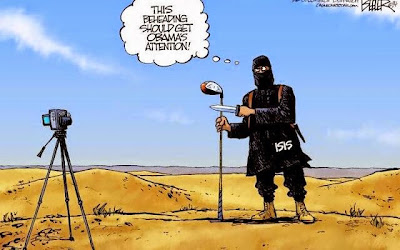