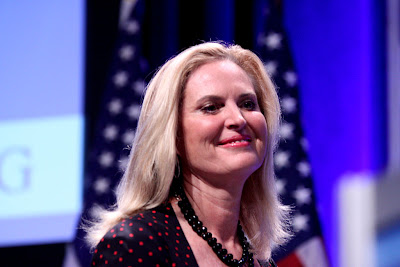 ◼ She is warm, composed, approachable and careful with her words. The mother of five and grandmother of 16 also has become the behind-the-scenes glue in Mitt Romney's well-organized campaign -- a trusted adviser who keeps a close eye on the news coverage about him and casts him as a personable family man. - Reuters

She is aware that her husband, Republican presidential front-runner Mitt Romney, has an image problem. Critics say he often seems stiff and reserved on the campaign trail, and has difficulty connecting with voters.
That isn't a problem for Ann Romney...

Last year, Ann Romney said, she told her husband that she would commit to a campaign in 2012 under one condition. "I'm not going to do all this unless you can get (to Washington) and fix it," she recalled. "And he said he would."
Email ThisBlogThis!Share to TwitterShare to FacebookShare to Pinterest