Is the old Obama campaign slideshow “Life of Julia” anywhere to be found on the web? 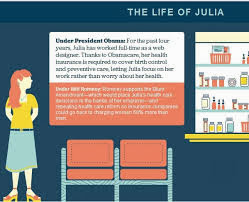 ◼ Is the old Obama campaign slideshow “Life of Julia” anywhere to be found on the web? - Althouse

Back in May 2012, everyone was talking about that graphic depiction of the benefits of various government programs. Remember?


Barack Obama has a new composite girlfriend, and her name is Julia. Her story is told in an interactive feature titled “The Life of Julia” on the Obama campaign website. Julia, who has no face, is depicted at various ages from 3 through 67, enjoying the benefits of various Obama-backed welfare-state programs.

"The Life of Julia" has come to be cited — somewhat humorously — for the proposition that the government has lured women away from men, into a dependent relationship with the government, and this has had various ill effects. But I want to take a new look at why the graphic used a female character. Using a female screened out the reality that males rely on government programs too.

UPDATE: “Julia was the one who designed the Obamacare website.” Which would explain why she’s been “disappeared” — she’s either been vanquished to Room 101, or she’s been invited to join the Inner Party, depending upon what you think its failure implies for the future of socialized medicine in Oceania.

◼ THE LIFE OF JULIA, the Obama/Biden version saved via The Wayback Machine
◼ http://thelifeofjulia.com/ - SPOOF TEAM
Email ThisBlogThis!Share to TwitterShare to FacebookShare to Pinterest