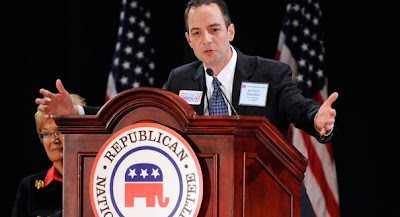 ◼ National Republicans have begun to intervene in a handful of key Senate and House battlegrounds where state parties are in disarray, seeking to head off the possibility that local mismanagement could cost the party control of Congress. - Politico

These “orphan states,” most notably behemoths with traditionally weak parties like California, Illinois and New York, are increasingly the focus of top GOP officials in the nation’s capital this spring....

In California and Illinois, the state parties have more debt than cash on hand for federal races, while the New York Republican Party had just $54,000 in federal funds in the bank at the end of February.

...GOP strategists in the states are equally frustrated with some of their parties.

“We’re just going to have to do a work-around,” said Jeff Miller, a top Sacramento Republican who served as finance chair of the California GOP in 2010. “Latino voter outreach, voter registration and candidate recruitment are all going to have to be done through vehicles outside the state party.”

The cash disparity is stark in California, where redistricting could bring more than 10 competitive House races this year. State Democrats began the year with $9.3 million — that’s not just in federal funds — while California Republicans had less than $439,000. That’s in part because of the money the state GOP spent on an unsuccessful attempt at blocking the newly-redrawn state Senate map.

“A lot of donors here were upset that that’s what their money was getting spent on,” said Rob Stutzman, a California-based GOP strategist.

A third California Republican operative grumbled about ideologically-driven activists being more interested in party purges than winning elections. This Republican noted that the first big party gathering after their dismal 2010 showing was marked not by soul-searching about what went wrong but was dominated by a resolution about whether GOP legislators who supported allowing voters to decide how to fill the budget deficit should be deemed as “traitorous” and recalled from office.

“The party has been co-opted by some folks who aren’t very good at raising money or winning elections,” said the California Republic
Email ThisBlogThis!Share to TwitterShare to FacebookShare to Pinterest