◼ Over and over, the media will treat your eyes and ears to the cut in food stamps that will apparently throw America in a zombie apocalypse and destroy the entire galaxy. They love to repeat over and over the size of the cut to the program – $5 billion sure sounds like a lot. - Soopermexican/IJ review

As the graph below shows, with a $5 billion cut, the budget for the SNAP program simply reverts back to 2011 levels. 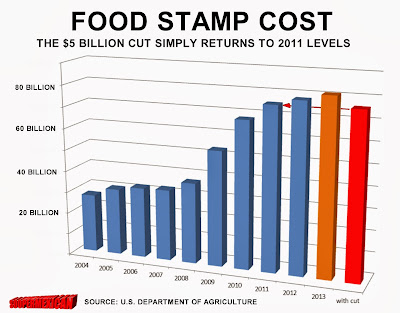 ...This cut reflects the failure of Obama’s stimulus, which he said was a one-time effort. Now we find that the “one-time” stimulus was supposed to be permanent and grown! No one saw that coming! Except nearly every conservative critic of the stimulus....

Far too many people in America believe that government provides everything. They don’t even consider the origin of the funds that government disperses, or as Obama would say, “redistributes.”

It’s hardworking patriots — the very people whom the Left demonizes — who put food on the tables of the poor.
Email ThisBlogThis!Share to TwitterShare to FacebookShare to Pinterest