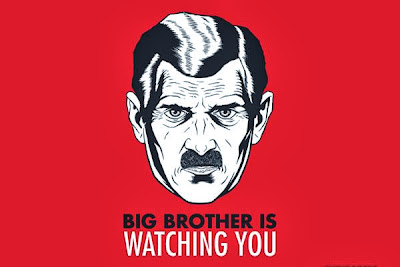 ◼ President Obama is taking a page out of George Orwell’s “1984″. Just like Big Brother in Orwell’s famous novel 1984, Obama uses words to mean the opposite. - Betsy McCaughey/Human Events

On Monday, when House Speaker John Boehner proposed a conference to bring the parties together, both Obama and Senate Majority Leader Harry Reid refused.

Worse, they called the House Republicans “anarchists” and “extremists.” These insults from a president who, four days earlier, pledged “mutual respect” in his ongoing talks with Iran’s president, the world’s leading exporter of terror.

The difference between Reagan and Obama is this: Reagan knew who the enemy was. He told the Russian president, “Mr. Gorbachev, tear down this wall.” But he dealt reasonably with fellow American Tip O’Neil. Sadly, Obama cowtows to the world’s villains, including Vladimir Putin and Rouhani, but refuses to sit down with Boehner.

Already Obama is spinning another Orwellian tale about the coming need to hike the debt ceiling. He claims that attaching conditions to raising the debt ceiling “has not been done in the past,” and “is not how our constitutional system is designed to work”. Untrue. In fact, that is so blatantly false that The Washington Post slapped the president with four Pinocchios for his debt-ceiling tale. But say it often enough, and maybe the public will believe it.

In truth, the House has the constitutional authority to delay any debt-ceiling hike or attach conditions to it. A president able to borrow freely, the framers understood, would have too much power. “An elective despotism is not what we fought for,” wrote Madison in Federalist 62.
Email ThisBlogThis!Share to TwitterShare to FacebookShare to Pinterest