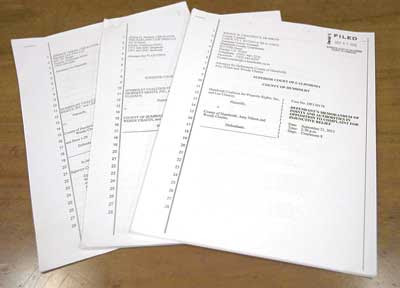 The story so far, short version: The Humboldt Coalition for Property Rights filed a California Public Records Act request in December 2011 requesting information about pending litigation against the county related to land use, planning and the county's general plan update, including the fees of outside attorneys who worked on the suits. The county, in HumCPR's view, proved less than cooperative.

About one year ago, HumCPR filed a complaint in court, seeking the information.
The county has been wasting time -- and money -- ever since....

It doesn't matter who's asking the county for this information, or why. Under the law, this information belongs to all of us. It's ours. It's public money, spent by public officials. This is not a matter of international espionage. We are not the enemy. We are the public. The public has a right to know what public money is spent on, even as it's being spent.

Humboldt County should release the facts before its overt lack of transparency and disregard for its legal obligation to release public information costs the very taxpayers it purports to represent any more money -- or any more faith in their public officials.

◼ A $64,000 question: Does the county have to disclose attorney fees to date? Counsel: Early release could lead to 'mischief,' would reveal strategy - Grant Scott-Goforth/The Times-Standard 2/03/2013

Boylan did not agree with Humboldt County counsel's assertion that billing information would give away legal strategy.

”That's a really bad argument,” he said. “The county is going to lose this litigation. It's going to be denied by any competent court.”

HumCPR Chairman Lee Ulansey said the county is required to provide the documents within 10 days and has failed to do so. He said the county is spending a fortune on land-use lawsuits and that the public has a right to know exactly how much is being spent.