...In a pointed letter, the Government Accountability Office’s chief lawyer said the administration hasn’t shown that it can learn anything by a “demonstration” project to pay bonuses to average-performing plans in the Medicare Advantage program. The lawyer also questioned “the agency’s legal authority to undertake the demonstration.”...

Republican opponents of Democrats’ health law said the GAO letter proves the administration is trying to cover for the law’s cuts to Medicare Advantage, an alternative private plan-based system that provides coverage for about a quarter of all Medicare beneficiaries.

“Lacking the legal authority to undertake a project of this magnitude shows how the Obama administration tried to use a technicality to sidestep Congress and write itself a blank check to spend more money for political purposes leading into this year’s elections,” said Sen. Orrin G. Hatch of Utah, the ranking Republican on the Senate Finance Committee, who has been keeping a close eye on the matter.

Earlier this year GAO issued a report saying the program was likely doomed to fail. In unusually stern language, the auditors urged the administration to cancel it altogether.

Wednesday’s letter went a step further in questioning the legal authority of the administration even to go forward. 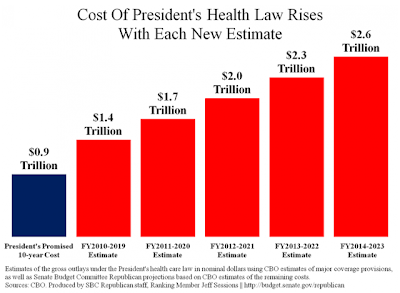 Call it President Obama’s Committee for the Re-Election of the President — a political slush fund at the Health and Human Services Department.
Only this isn’t some little fund from shadowy private sources; this is taxpayer money, redirected to help Obama win another term. A massive amount of it, too — $8.3 billion. Yes, that’s billion, with a B.