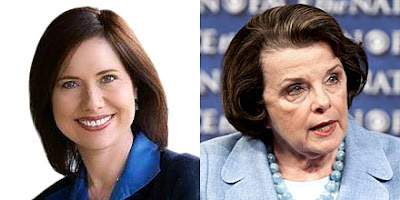 ◼ Behind in the polls and even farther behind in fundraising, autism activist Elizabeth Emken, a Republican, on Monday challenged U.S. Sen. Dianne Feinstein (D-California) to a series of debates across the state. - LA Times (image source)

In a letter to Feinstein, who is seeking her fourth full term in November, Emken proposed “statewide televised debates that would focus on regional issues.” She suggested debating water issues in the Central Valley, jobs and economic matters in the Inland Empire and education topics in Los Angeles, among others.

Emken's campaign staff announced the debates proposal during a telephone news conference with reporters, shortly after a California Field Poll released over the weekend showed Feinstein leading Emken 51% to 32% among registered voters.

...Campaign finance records show Feinstein had more than $2.6 million in the bank at the end of the latest reporting period, while Emken had $23,669....

U.S. Senate hopeful Elizabeth Emken challenged incumbent Sen. Dianne Feinstein to a series of debates around the state, including one in Riverside focused on the state’s economic woes and foreclosure crisis.