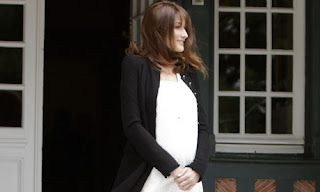 ◼ Nicolas Sarkozy flies back from euro talks in Germany to see his new daughter, the first baby born to a serving French president - Guardian (image source)

France's first lady Carla Bruni-Sarkozy gave birth to the first French presidential baby on Wednesday night. The child, a girl, had been expected for a fortnight, and was born at the La Muette private clinic in the chic 16th arrondissement of Paris.

President Nicolas Sarkozy was reported to have flown back from Germany, where he was having urgent talks with Chancellor Angela Merkel about saving the euro, to see his newborn daughter.

According to French reports she was born around 7.30pm on Wednesday evening. No further details were released. It is first child to be born to a serving French president.
Email ThisBlogThis!Share to TwitterShare to FacebookShare to Pinterest