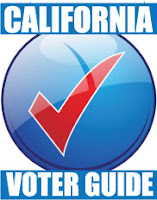 Proposition 68: California Parks, Environment, and Water Bond- would issue a $4 billion general obligation bond, with a 3.5% interest rate over 30 years, bringing the bill to the taxpayers up to $6.4 billion total.

The CFRW says vote NO.

If you would like ALL the talking points for each proposition, please email our Advocate at advocate@cfrw.org.
____
Email ThisBlogThis!Share to TwitterShare to FacebookShare to Pinterest