◼ Attkisson’s forthcoming book--“Stonewalled: My Fight for Truth Against the Forces of Obstruction and Intimidation in Obama’s Washington”—reads in part like a spy thriller. - Howard Kurtz/FOX

From the moment that Sharyl Attkisson met a shadowy source I’ll call Big Mac, she was plunged into a nightmare involving mysterious surveillance of her computers.

They met at a McDonald’s in Northern Virginia at the beginning of 2013, and the source (she dubs him Number One) warned her about the threat of government spying. During their next hamburger rendezvous, Big Mac told Attkisson, then a CBS News reporter constantly at odds with the Obama administration, that he was “shocked” and “flabbergasted” by his examination of her computer and that this was “worse than anything Nixon ever did.”

Attkisson’s forthcoming book--“Stonewalled: My Fight for Truth Against the Forces of Obstruction and Intimidation in Obama’s Washington”—reads in part like a spy thriller. Just when you think Attkisson’s imagination might be running away with her comes wave after wave of evidence that both her CBS computer and personal iMac were repeatedly hacked and its files accessed, including one on Benghazi. A consultant hired by CBS reached the same conclusion. Further scrutiny of her personal desktop proves that “the interlopers were able to co-opt my iMac and operate it remotely, as if they were sitting in front of it.” And an inspection revealed that an extra fiber-optics line had been installed in Attkisson’s home without her knowledge.

This is chilling stuff.... KEEP READING

◼ CBS goes to ground over claims it buried anti-Obama stories
◼ Brave journalist here. This will be fun to follow. - Disussion at Lucianne 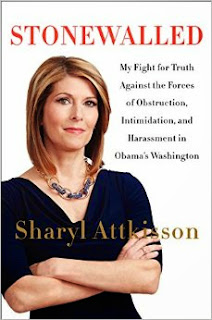 ◼ PreOrder: Stonewalled: My Fight for Truth Against the Forces of Obstruction, Intimidation, and Harassment in Obama's Washington. Comes Out November 4, 2014
Email ThisBlogThis!Share to TwitterShare to FacebookShare to Pinterest