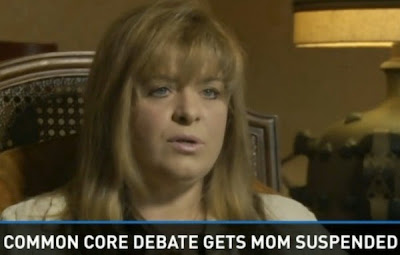 The two week suspension was reportedly triggered after the officials charged that Katherine Duran was “disrupting the school.” When asked to clarify what Duran’s disruption was, Gabe Ross, a spokesperson for the school district, told the media, “It appears (she) went a little too far with regards to how she distributed information at school sites, distributing information to children directly.”

But according to Duran, she never distributed information to students on school grounds or to the children directly. The school district has even acknowledged that Ross’s statement was incorrect. See, Duran did not distribute the opt-out forms, her son did. And for that, she has been suspended.

Officials at a California grade school have suspended the mother of a 12-year-old boy over her – and his – criticism of the Common Core Standards Initiative.

A police officer delivered a form labeled “withdrawal of consent” to the Duran home, legally banning Katherine Duran from the premises of Mark Twain Elementary for 14 days.

What was the mother’s crime? Well, school administrators and Sacramento school district officials have had tremendous difficulty getting their story straight on that one.
Email ThisBlogThis!Share to TwitterShare to FacebookShare to Pinterest