Strengthening the IRS‘ ability to make trouble for conservatives in politics is a priority for Mr. Obama and Harry Reid, the leader of the Democratic majority in the Senate. They regard the IRS scandal not as a scandal, but as a starting point for suppressing enemies 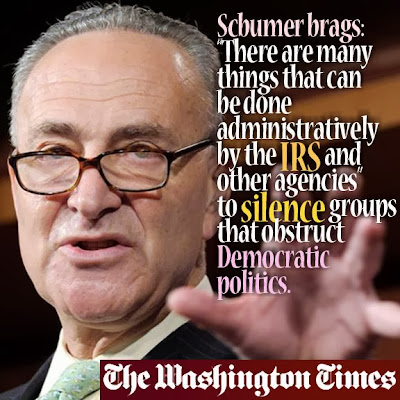 ...The Tea Party opposes much of President Obama’s agenda, and to Mr. Schumer, that’s both a sin and a crime.

In a speech last week to the liberal Center for American Progress, the senior senator from New York said, “There are many things that can be done administratively by the IRS and other government agencies” to silence groups that obstruct Democratic policies....

The latest group harassed by the IRS might be the smallest in America; namely, conservatives in Hollywood. An organization known as Friends of Abe, named for Abraham Lincoln, is trying to get tax-exempt status. The IRS is doing what it can to scuttle the application and wants to see the organization’s membership list.

The actors, directors and writers who are Friends of Abe are wary of coming out of the closet where traditional values are often hidden in Hollywood. Nothing threatens a promising career in Tinseltown faster than exposure as a Republican or other conservative.

In a just world, the Center for American Progress, the 501(c)(3) nonprofit organization that hosted Mr. Schumer’s call for government harassment of conservatives groups, would get similar scrutiny....

Strengthening the IRS‘ ability to make trouble for conservatives in politics is a priority for Mr. Obama and Harry Reid, the leader of the Democratic majority in the Senate. They regard the IRS scandal not as a scandal, but as a starting point for suppressing enemies.

On Wednesday, Mitch McConnell told Fox News' Megyn Kelly that the Obama administration is "initiating a new rule through the Treasury Department in the IRS to quiet the voices of outside groups." According to McConnell, the new rule would redefine what groups like the Tea Party could advocate, during a political campaign "to silence the voices of their critics going into this important fall election by using the Treasury Department regulations."

...McConnell's got it right. In the hands of a criminally partisan IRS "reference to a particular issue . . . distinguishing the candidate from others" is not only permission to, but an instruction to harass and deny 501 (c) (4) status to any group that opposes ObamaCare, amnesty, same-sex marriage, or any other issue dear to the president's heart. Far from creating a bright-line distinction, "distinguishing the candidate from others" sets no boundaries at all, giving one of Washington's most politicized, corrupt, and powerful agencies unfettered discretion to reward Obama's friends and punish his enemies.
Email ThisBlogThis!Share to TwitterShare to FacebookShare to Pinterest