It's now legal to buy a new car in Cuba. This is what passes for "reform" in socialist countries. 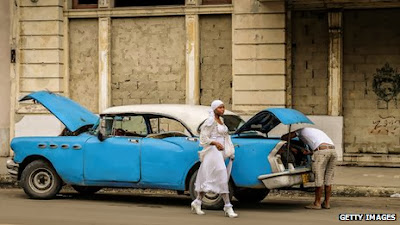 ◼ Cubans are now able to buy modern cars freely for the first time since the revolution in 1959. - BBC via ◼ Ron Nehring

Now, Cubans will no longer need the government's approval to buy new cars from state-owned sellers.

But prices remain out of reach for many.

That is eight times more than what it would cost in Britain, for example.

The vast majority of people in Cuba earn a state wage of around $20 (£12) per month.

The government says some of the profits from sales will go towards developing Cuba's decrepit public transport system.