Even though she is a well-documented liar, she is still “most admired.” Tell the truth (well) and end this. And end the hostility toward each other before you destroy all of us and our children’s future. 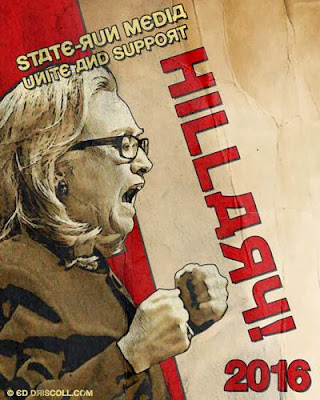 ◼ (T)he New York Times (the very model of that propagandistic veneer) already knows their bread is buttered with Hillary, not Obama. They demonstrated that Saturday with their revisionist article on Benghazi, bent on taking that scandal (Hillary’s Achilles’ heel) off the table for the coming elections or at least seriously defusing it.

She is so far in front, in fact, that her competitors are not even in hailing distance. Hillary is the one who can consolidate and solidify the “gains” of the Obama era in a way Obama himself never could because she is much more politically savvy — Obama was only savvy about getting elected, not governing — and has the backing of her even more politically savvy husband. Hillary is the one who can fully remake the United States into some version of Western Europe or, yet more frighteningly, China, a permanently stratified state capitalism governed by quasi-totalitarian bureaucrats. (We can call this system Soros Marxism, meaning a ruling clique of increasingly rich corporate czars employing a propagandistic veneer of socialist equality to keep the power and wealth for themselves.)

...2014 is a time for victory not defeat. We shouldn’t be wasting our ammunition on each other. Nobody has unlimited quantities. Concentrate on principal enemy Hillary. Even though she is a well-documented liar, she is still “most admired.” Tell the truth (well) and end this. And end the hostility toward each other before you destroy all of us and our children’s future.
Email ThisBlogThis!Share to TwitterShare to FacebookShare to Pinterest