As part of a two-year plan to “Eviscerate, Mitigate, Litigate, Cogitate, and Agitate,” the memo outlines a strategy 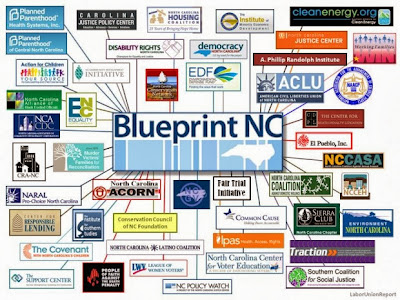 ...the Charlotte Observer ran a story about a leaked confidential memo released by a below-the-radar shadow group called Blueprint NC. The confidential memo revealed a left-wing plan to attack North Carolina’s governor and other conservative leaders.

According to the Observer’s piece, the confidential memo was from Bluepint NC’s Communications Coordinator Stephanie Bass and addressed to its “partner groups.”

As part of a two-year plan to “Eviscerate, Mitigate, Litigate, Cogitate, and Agitate,” the memo outlines a strategy to target Republican Governor Pat McRory and other conservative leaders....

__________
Factor in the IRS and NSA in collusion with the White House...
Email ThisBlogThis!Share to TwitterShare to FacebookShare to Pinterest