RAND PAUL: Retrieving California is the key to the future 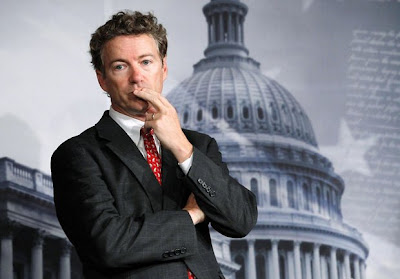 ◼ The GOP can’t be a national party without it - By Sen. Rand Paul/WASHINGTON TIMES (image source, AP)

Being inclusive and tolerant does not mean giving up conservative principles, particularly on the fiscal front. But it does mean sounding the right tone and finding common ground. It also means becoming a party that incorporates more of the ideas of a libertarian-leaning conservatism.

What do I mean by that? National defense is the primary job of the federal government. We should do it and do it well. We should defend America and spend what we need to do so. But, we also should consider carefully our involvement in regions that do not affect our security. We should re-examine or apply cost-benefit analyses to aspects of our foreign policy that don’t make sense. We should also restore constitutional order to our foreign policy. We need more bridges built here in America and fewer built in Pakistan. It makes no sense to borrow money from China to send to Pakistan.

This brand of conservatism would also recognize the importance of local control and federalism. From education to drug policies, from health care to marriage, many issues now pushed to the federal level should be returned to the states, where they belong.

This brand of conservatism would include populist elements like opposing bailouts that move money from Main Street to Wall Street and would be deeply skeptical of the role of the Federal Reserve. The practice of big government colluding with big business to enact unnecessary regulations — the cost of which make many small businesses unable to compete — should not be tolerated by anyone who truly believes in free markets.

Republicans reaching out to new audiences doesn’t mean being less conservative, but applying libertarian and constitutional principles where they are sorely needed on multiple issues.

I learned a lot in California last week and will no doubt learn more in the coming months in my continuing efforts to broaden and sharpen Republicans’ message, everywhere across America and in every state — red, blue and Golden.
Email ThisBlogThis!Share to TwitterShare to FacebookShare to Pinterest