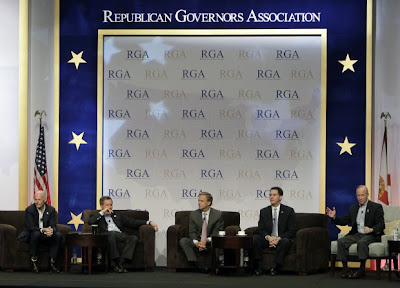 ◼ Republicans and conservatives in general will feel a lot better if they focus less on Washington and more on the 24 state capitals (including more than half the American people) which have Republican governors and Republican control of the state legislature. - NEWT GINGRICH LETTER/Human Events (image source)

Washington is likely to remain a painful spectacle for the near future. President Obama and the elite media will create anti-conservative and increasingly liberal policy directions. If the last seven weeks are any indication, Washington Republicans will range from inarticulate to deeply split. House Republicans have the Constitutional tools to take on Obamaism, but as long as the leadership refuses to operate strategically, those tools will be largely unused, with [Oversight Committee] Chairman Darrell Issa’s investigations as a striking exception and model for the others.

The good news is that conservatism is on the march outside Washington. (And outside Sacramento, Springfield, and Albany, which will be the new case studies in destructive tax and regulatory policies and the disastrous economic consequences of job-killing and taxpayer flight to other states. All three states will become poorer as long as they are dominated by liberalism....)

In Washington, national policy debate seems mired down between a party of big government and redistribution and a party of pain and cuts.

In the 24 states with Republican governors and Republican legislatures there is an emerging party of the future.

Conservatives in general and Republicans in particular ought to spend more time focusing on the states.

The Republican Governor’s Association (RGA) could become the leading idea producer of any Republican organization in the country.

Despite the spectacle of taxing and spending in Washington, there are real signs of hope in the states.

Be of good cheer.

The future will not be defined by President Obama and the elite media.

The future will be defined by the American people — and it will be a much more conservative future than the elite commentators currently expect.
Email ThisBlogThis!Share to TwitterShare to FacebookShare to Pinterest