DeMint’s move and the growing frustration inside the GOP 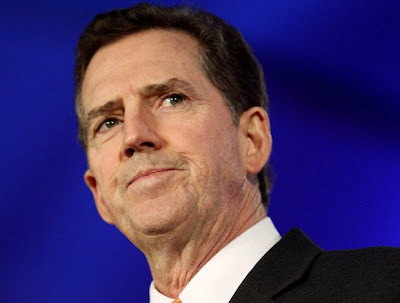 ...DeMint said many people were shocked that a U.S. senator would give up his seat. But given today’s political situation, he believes he will have greater influence — not just on the public debate generally but specifically on the Senate — from the outside. “I won’t be taking votes, but I guarantee you I will affect more votes at the Heritage Foundation than I do in the Senate.”

...“I just believed that Republicans have not been reliable partners of the conservative cause,” he said. “I think there is a lack of vision and boldness that we need at the national level. I’m not pointing to anyone in particular, but it’s been a long time since I’ve been in a conservative conference where someone stood up and just inspired people with a message of what we really stand for and what America needs at this point.”

The result of that continuing Republican weakness has been — no surprise — Democratic victories. The 2012 results convinced DeMint that those victories weren’t flukes and might go on for quite a while if Republicans don’t change. “After the election it was clear that a majority of Americans believe the Democratic Party can do more for them than Republicans,” DeMint said. “Yet I know, factually, provably, that conservative ideas are working at the state level all around the country. Right-to-work states are attracting businesses. School choice is working for minorities and the poor. And we can prove that Obama’s policies, liberal, progressive policies, in California, Illinois, New York — you can see where they’re going. We are going to continue to lose elections at the national level if we don’t convince Americans that our ideas are better.”

For libertarians, Christian conservative pro-lifer Jim DeMint was the best thing to come through the Senate in decades. DeMint, quitting early to run the conservative Heritage Foundation, embodied an underappreciated fact of life in Washington: The politicians who most consistently defend economic liberty are the cultural conservatives.

The National Taxpayers Union gave DeMint a 93 percent rating last year, putting him third out of 100. DeMint scored 100 percent from the Club for Growth, whose sole focus is economic conservatism.

Until last year, DeMint was the only senator with a lifetime 100 percent from the Club for Growth. He still has a perfect record, but now he has company: Rand Paul, Mike Lee and Ron Johnson -- all pro-life conservative freshmen derided as "Jim DeMint disciples" by the likes of lobbyist Trent Lott....

Traditional morality and limited government aren't enemies. They're friends. DeMint proved that, and he left behind heirs who will continue to do so.
Email ThisBlogThis!Share to TwitterShare to FacebookShare to Pinterest