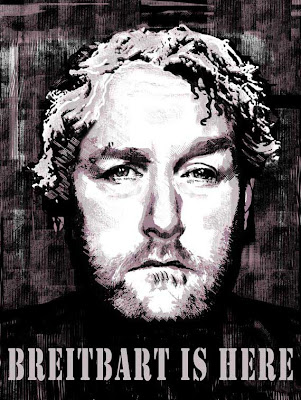 ◼ There is a new street art poster that’s being emailed around and will no doubt eventually be spotted on a street corner near you. It’s a gritty black and white image of Andrew Breitbart looking both battle-worn and ever vigilant with the caption: “BREITBART IS HERE.” - Sarah Palin at Big Government

...Breitbart’s most immediate mission was the belated vetting of Barack Obama. This obviously is an issue very near and dear to my heart.

During the ’08 campaign, the same media that reported breathlessly about an old used tanning bed I purchased to get some sun during the dark Alaskan winter, couldn’t be bothered to investigate Barack Obama’s associations, statements or even his voting record as a state senator. Suntans and what I wore on the campaign trail were more important than Obama’s political background. Unbelievable.

But when you come to think of it, the media didn’t investigate either of our actual political records very closely.

Barack Obama and I both served in political office in states with a serious corruption problem. Though there is a big difference between serving as the CEO of a city, then a state, and regulating domestic energy resources, and being a liberal Community Organizer, bear with me on the comparison. The difference between my record and Barack Obama’s is that I fought the corrupt political machine my entire career (and I have twenty years of scars to prove it) on the local, state, and national level. But Obama didn’t fight the corruption he encountered. He went along with it to advance his career. Graft, cronyism, and quid pro quo are the methods of the Chicago political machine from which he emerged.

You would think the media – those watchdogs of the public trust – would be interested in this. But they refused to vet Barack Obama. With tingles up their legs, they shielded him....

◼ A BRIEF SHINING MOMENT: AN EVENING WITH BREITBART AND PALIN - Chris Bannon/Big Government

I sat back from the table a few feet and just listened to the discussions which were fast, furious, brilliant, broad, and deep. It was an amazing thing to be a part of, even if I was just an uninformed passer-by. The discussion went on for hours and with great engagement by all until the Palins joined us. Then, the conversation shifted entirely towards Palin and her political plans and importance. A great night had gotten better, if that was possible. Breitbart pontificated and jousted with Bruce and the press and the handlers. Palin would listen and weigh-in as all sat on edge hoping for THE declaration or even a wink and a nod, but it did not come. So without it, everyone would sound off again, Breitbart would go off in style, and round and round the conversation would go, to everyone’s delight.

After several hours (2:00 AM), the Palins decided it was time to retire, and the group began to dissipate. I turned to the young hotshot journalist and asked him, "Does this happen all the time on the campaign trail?” And he looked at me and said, “Does what happen all the time?” I said, "The politician you are covering and her disciples come down, hang out and just casually engage with you all?” He looked at me through his beer goggles and said, “This never happens… I have never seen this ever happen and you were just treated to a unique event that most of us will go a lifetime without being a part of.” I was stunned; it seemed so casual and fun and interesting that I just assumed it was how it always played out.
Email ThisBlogThis!Share to TwitterShare to FacebookShare to Pinterest