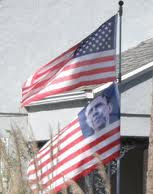 Tempers are flaring over a version of the American flag flying in Lake County. A veterans group says the flag is an outrage.

The flag, which features a picture of President Obama, was taken down Tuesday afternoon.

"I can't describe how upset was because you just don't do that to the American flag," Van Beck said.

"Joseph Stalin, pictures of Mao, pictures of Adolph Hitler. The pomp, the ceremony -- the flags like that," Masterjohn said....

"If you've been a veteran and fought -- and some died for this flag -- you don't want to see it desecrated. That's how simple it is," Van Beck said.

◼ One nation, under Obama - It’s his country. You just live in it. - John Hayward at Human Events

...The idea that any citizen of the United States, of any political persuasion, needs to have the wrongness of this outrage explained to them is mind-boggling. The modern Democrat Party has become a culture so alien that if Captain Kirk encountered it, he’d beam back up to the Enterprise and slam the warp drive up to maximum to escape, lest his crew be driven mad by sustained exposure.

But the Democrat Party of Lake County, Florida still doesn’t really understand what’s wrong with their creepy and offensive cult of personality...
Email ThisBlogThis!Share to TwitterShare to FacebookShare to Pinterest