"Americans are dreamers too."

Speaking From The Heart, Trump's Speech Was All Democrats Feared It Would Be https://t.co/JnRdXyDWYT #tcot #tlot 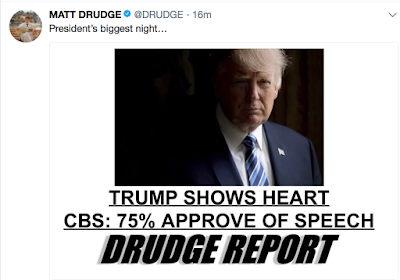 Eight in 10 Americans who watched tonight felt that the president was trying to unite the country, rather than divide it, according to CBS News poll https://t.co/OZsw2drXbJ pic.twitter.com/6fEeSPMkdW

What's really "woke" is waking up from a long illusion of decline and remembering that this is America: slayer of giants, factory of dreams, frontier of freedom, and strong arm of compassion. We specialize in doing what cannot be done.

@POTUS Your speech was so good I could listen to it again with pride.Bravo

Donald Trump is teaching Republicans how to fight https://t.co/ygxKBgEQRB via @nypost

Tonight, President Trump delivered his first #SOTU address. He outlined the record-setting accomplishments of his first year and cast an inspiring vision for building a safe, strong, and proud America. https://t.co/Tc8uwgjI9b

On @foxnews with @seanhannity: “The president highlighted the
tremendous successes we had in 2017: historic tax cuts, substantial
regulatory reform, repealing the Obamacare individual mandate, and
confirming a record number of strong constitutionalist judges.” pic.twitter.com/N2EOACBrLH

Trump: US Foreign Aid Should ‘Only Go to Friends of America’ - United States’ foreign aid should in the future “only go to friends of America, not enemies of America,” President Trump said in his State of the Union on Tuesday night, noting that many c... https://t.co/9cwxosVXki

Trump: ‘Americans Are Dreamers Too’ - President Donald Trump used his first State of the Union address to detail his immigration reform plan and to call on Congress to work together to protect the nation, reminding Congress that “Americans are dreamer... https://t.co/jorEix7EId

This page has the full #SOTU video, transcript, photos and bios of the honored guests, speech highlights, and a number of quotes you can download for use on social media. https://t.co/z8pTuBFOic

Democrats -- who overwhelmingly voted back in June 2016 that Israel's capital was Jerusalem -- sit for Trump's announcement of the same.

Smart of Mike Pence to put superglue on Democrats' seats. They're not looking good right now.

"April will be the last time you will ever file under the old and broken system. Millions of Americans will have more take home pay starting next month, a lot more." -POTUS #SOTU

Democrats couldn't even stand for Americans taking home more money. Remember that in the midterms. pic.twitter.com/Zb7IPR7og5

#SOTU Service Announcement: If you were triggered by the President's speech and need a safe space -- don't forget your emotional support peacock is there for you. pic.twitter.com/lmPnhcCKZW