THE SCATHING SPEECH THAT TAKES THE MEDIA TO TASK FOR BLACKOUT OF GRUESOME ABORTION TRIAL: IF THE ‘DOCTOR’ USED AN AR-15, YOU BET THEY’D CARE

◼ Ten Congressmen took to the floor of the U.S. House on Thursday to shed some light on the grisly details surrounding the trial of Kermit Gosnell, an abortionist who stands accused of murdering seven newborn infants (allegedly cutting their spines with scissors) and one grown woman. - Becket Adams/The Blaze

Among the 10 U.S. lawmakers was Rep. Chris Smith, a New Jersey Republican who says the media has intentionally ignored Gosnell’s “House of Horrors.”

“If Dr. Gosnell had walked into a nursery and shot seven infants with an AR-15, it would be national news and the subject of presidential hand-wringing,” said Rep. Smith.

Indeed, considering the fact that anti-gun advocates in the media, including CNN’s Piers Morgan, are usually Johnny on the Spot when it comes to gun-related crime involving children, the lack of Gosnell coverage is truly puzzling.

“Will the decades-long major national news media cover-up of the brutality—and violence—of abortion methods ever end?” Rep. Smith continued. “Will Americans ever be told the horrifying details as to how — and how often — abortionists dismember, decapitate, and chemically poison innocent babies?”

“Infant beheadings. Severed baby feet in jars. A child screaming after it was delivered alive during an abortion procedure. Haven’t heard about these sickening accusations?

It’s not your fault. Since the murder trial of Pennsylvania abortion doctor Kermit Gosnell began March 18, there has been precious little coverage of the case that should be on every news show and front page.”

She goes on to point out: “A Lexis-Nexis search shows none of the news shows on the three major national television networks has mentioned the Gosnell trial in the last three months. The exception is when Wall Street Journal columnist Peggy Noonan hijacked a segment on Meet the Press”

In a letter sent by Media Research Center President Brent Bozell and twenty prominent leaders call on the broadcast networks to stop censoring coverage of the trial, pointing out that as of April 4th, since the trial began ABC, CBS and NBC have given the story zero coverage in their morning and evening news shows. 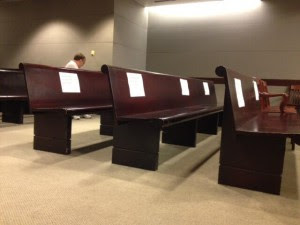 ◼ Baldwin also told the jury about seeing at least five aborted babies moving, breathing, and, in one case, "screeching" after late-term procedures at the clinic - Philadelphia Inquirer

...And it's not like we currently have a president who repeatedly fought laws that would protect children such as the ones that Gosnell is accused of killing. Oh wait, we do have a president who did that? I'm pretty sure the media would have told us all about it if so, right? Oh wait, they bought all his excuses -- contradictory though they were -- for why he was fighting the Illinois Born-Alive Infants Protection Act? Want to know more? ◼ Read this excellent piece by Ramesh Ponnuru.

◼ Conor Friedersdorf and Megan McArdle write about this at The Atlantic and The Daily Beast, respectively... - The Volokh Conspiracy

◼ Why Dr. Kermit Gosnell's Trial Should Be a Front-Page Story - CONOR FRIEDERSDORF/The Atlantic

◼ [For photos of Gosnell's late-term aborted babies, shown in the Grand Jury Report, click on pages 85, 102, and 115 of the report. Please proceed with caution, as these photos are highly disturbing.] (PDF)
Email ThisBlogThis!Share to TwitterShare to FacebookShare to Pinterest