"I have a dream": Today we honor the life and legacy of Dr. Martin Luther King, Jr. #MLKDay

Celebrate Martin Luther King Day and all of the many wonderful things that he stood for. Honor him for being the great man that he was!

Honored to stop by Dr. Martin Luther King Memorial with my family & @SenatorTimScott. "Out of the mountain of despair, a stone of hope." pic.twitter.com/8LPnFJy8LY

On the steps of the Lincoln Memorial, inscribed in granite, are the immortal words, "I have a dream" https://t.co/YfpmYQLINa #MLKDAY

On this day we honor the memory of the man who spoke those words. We honor the cause for which he spoke them. #MLKDAY https://t.co/1jgii32buz

Trump just appeared with MLK III and went back up the elevator pic.twitter.com/UJNPJld2CD

Today we honor Martin Luther King Jr. May we forever remember his vision of freedom, equality and opportunity. pic.twitter.com/wq5a5O3LOs 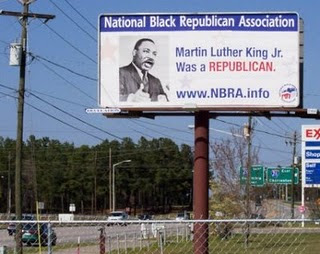 Did you know...
◼ The Republican Party - the party of Abraham Lincoln - was borne in 1854 out of opposition to slavery.

◼ The party of Jim Crow and the Ku Klux Klan was, as Jeffrey Lord points out in an article at the WSJ, the Democratic Party.

◼ The 13th (abolishing slavery), 14th (due process for all citizens) and 15th (voting rights cannot be restricted on the basis of race) Amendments to the Constitution were enacted by Republicans over Democratic opposition.

◼ The NAACP was founded in 1909 by three white Republicans* who opposed the racist practices of the Democratic Party and the lynching of blacks by Democrats.

◼ In fairness, it was the Democrat Harry Truman who, by Executive Order 9981 issued in 1948, desegregated the military. That was a truly major development. Yet - the military has been the single greatest driving force of integration in this land for over half a century.

◼ It was Chief Justice Earl Warren, a former Republican Governor of California appointed to the Supreme Court by President Eisenhower, also a Republican, who managed to convince the other eight justices to agree to a unanimous decision in the seminal case of Brown v. Board of Education. That case was brought by the NAACP. The Court held segregation in schools unconstitutional. The fact that it was a unanimous decision that overturned precedent made it clear that no aspect of segregation would henceforth be considered constitutional.

◼ Republican President Ike Eisenhower played additional important roles in furthering equality in America. He "proposed to Congress the Civil Rights Acts of 1957 and 1960 and signed those acts into law. . . . They constituted the first significant civil rights acts since the 1870s." Moreover, when the Democratic Governor of Arkansas refused to integrate schools in what became known as the "Little Rock Nine" incident, "Eisenhower placed the Arkansas National Guard under Federal control and sent Army troops to escort nine black students into an all-white public school."

◼ The Civil Rights Act of 1964 was championed by JFK - but it was passed with massive Republican support over 80%) in Congress and over fierce opposition from Democrats who made repeated attempts at filibuster. Indeed, 80% of the vote opposing the Civil Rights Act came from Democrats.( Women were added to the Act as a protected class by a Democrat who thought it would be a poison pill, killing the legislation. To the contrary, the Congress passed the Act without any attempt to remove the provision....

◼ Martin Luther King Jr. was the most well known and pivotal Civil Rights activist ever produced in America. His most famous speech, "I Had A Dream," was an eloquent and stirring call for equality. You can find it here. Rev. King was, by the way, a Republican.

◼ h/t, and credit to: Wolfhowling, who compiled this wonderful collection of links: Standing At The Crossroads - Identity Politics, Multiculturalism & The Melting Pot (Updated & Bumped)
◼ article in WSJ

* To advance civil rights for blacks, Republicans started the NAACP on February 12, 1909, the 100th anniversary of the birth of Abraham Lincoln. The first black head of the NAACP was black Republican James Weldon Johnson who became general secretary in 1920 and wrote the lyrics to the song "Lift Every Voice and Sing". Republicans also founded the HBCU's (Historically Black Colleges and Universities) because Democrats were trying to prevent blacks from getting a good education.

◼ To Celebrate Black History Month, Congressman West took to the House Floor with a remarkable speech on the relationship between African-Americans and the Republican party - MUST WATCH.
Email ThisBlogThis!Share to TwitterShare to FacebookShare to Pinterest