Today is the 71st anniversary of the attack on Pearl Harbor. 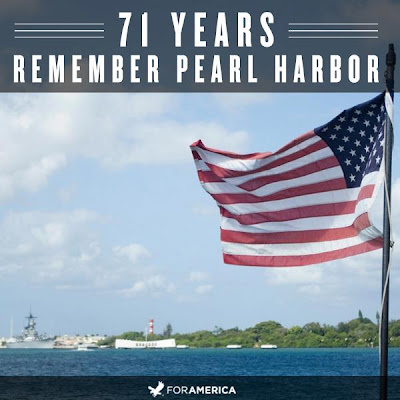 Greater Birmingham Republican Women: ‎71 years ago today, a date which will live in infamy. Please take a moment today to remember the attack on Pearl Harbor and the thousands of Americans that served in World War II.

Acadiana Republican Women: December 7: Day Of Infamy: The History Of Pearl Harbor! Remember all who were lost at Pearl Harbor today in your prayers.

The Kitchen Cabinet: ‎71 Years ago today, the magnificent USS Arizona met her fate, along with seven other battleships, hundreds of airplanes, and 2,400 navy, marine, army, and civilian personnel.

"They were a “can-do” generation who did not take “no” for an answer. They did not put off until tomorrow what needed to be done today. We should remember their resolve, honor their commitment, and seek to emulate their example. They truly were the greatest generation."

Never forget...
Email ThisBlogThis!Share to TwitterShare to FacebookShare to Pinterest