The half-joking response to the question in the title of this post is that policymakers should look at what’s happening in poorly run jurisdictions such as California, France, Illinois, and Greece – and then do just the opposite.

In other words, steer clear of punitive class-warfare tax rates and make sure to control the burden of government spending.

But there’s an even simpler rule that is very correlated with good fiscal policy, at least at the state level. Governments should not impose income taxes.

If you look at this map from the Tax Foundation, you’ll notice that there is a heavy overlap between the 10 states with the lowest overall tax burdens and the 9 states (Alaska, Florida, New Hampshire, Nevada, South Dakota, Tennessee, Texas, Washington, Wyoming) that don’t have income taxes. 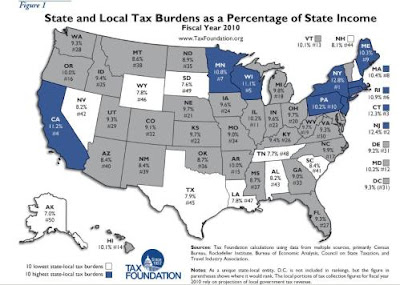 More specifically, 7 of the non-income tax states are among the 10 states with the lowest tax burdens. Only Florida and Washington are outside the top 10.

It’s also worth noting that some of the states with the most “progressive” income tax systems are well represented on the list of the 10-worst states – including California, New York, New Jersey, Maine, and Rhode Island.

◼ The more important question is whether this approach leads to better economic performance. The evidence is pretty clear that zero-income-tax states grow faster and create more jobs. - Dan Mitchell

◼ Comparing Obamanomics with Reaganomics, Looking at Evidence from the States - Dan Mitchell

◼ We'll never see this kind of reform in California. Quite the reverse, if the last election is an indication of a trend. Statists never get that, the more one raises tax rates, the more wealth-generating taxpayers will choose to leave and economic performance stagnates. - Public Secrets
Email ThisBlogThis!Share to TwitterShare to FacebookShare to Pinterest