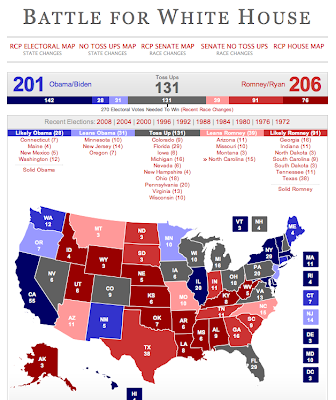 A new poll shows Republican Mitt Romney leading in Pennsylvania, a state that Republicans had all but written off just weeks ago but which is now listed as a toss up by the Real Clear Politics website.

Susquehanna Polling and Research provided The Washington Examiner with a poll it conducted for state party officials that shows Romney with a 49 percent to 45 percent lead over President Obama.

It's the first poll to show Romney leading among likely voters in the Keystone State.

The second presidential debate doesn’t appear to have made a difference in Rasmussen Reports’ first post-debate look at the race in Ohio. It’s still a toss-up.

A new statewide poll shows a tight race between President Barack Obama and challenger Mitt Romney, as well as growing enthusiasm among Republicans for their nominee.

◼ CONNECTICUT: Obama 48, Romney 45... Obama carried the state by 23% in 2008
Email ThisBlogThis!Share to TwitterShare to FacebookShare to Pinterest