If Obama were really doing so well, why would the media have to resort to such distortions? And why would he be in Wisconsin in the first place? 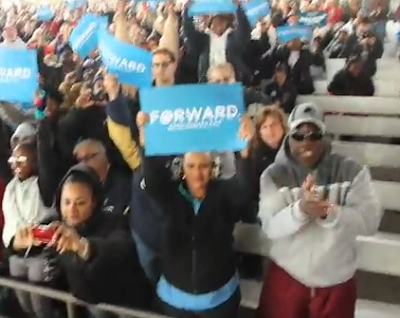 President Barack Obama is having trouble drawing large crowds on the campaign trail. At the Democratic National Convention in Charlotte, his campaign was forced to move his acceptance speech from the 74,000-seat Bank of America Stadium to the 20,000 Time Warner Cable Arena, citing weather as the excuse. But the media are always eager to help--for example, putting 18,000 people inside a 5,000-seat arena at an Obama event in Milwaukee on Saturday.

The contradiction was first noted by battlegroundwatch.com. Local media, including the Milwaukee Journal-Sentinel, reported that Obama had addressed "supporters who filled the 5,000-seat BMO Harris Pavilion, along with thousands more who sat in bleachers and stood on the pavement beyond the protection of the roof, even as wind and rain lashed down in the latter moments of the near 30-minute speech."

The pavilion was not "filled"--a local reporter for Patch.com filmed empty seats in the bleachers at the side of the arena (see above). Nevertheless, the Journal-Sentinal played it safe, putting attendance at roughly 5,000-plus, a small but respectable turnout.

That's not how national media covered it. Darren Samuelsohn of Politico reported that the president addressed "a crowd the Obama campaign estimated at 18,000 in a city park overlooking Lake Michigan" in an attempt to "lock up" Wisconsin. More at the link
Email ThisBlogThis!Share to TwitterShare to FacebookShare to Pinterest