Santorum a late bloomer in Iowa 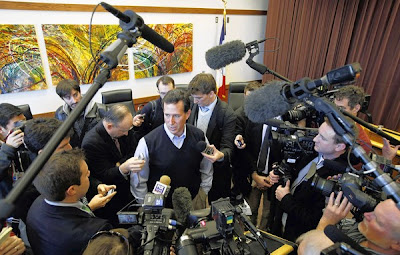 ◼ Of all the Republican candidates, he has spent the most time traveling the state, and now his efforts seem to be paying off. The media is showering attention and more voters seem to be swinging his way. - LA Times (image source)

After months of hard-slog campaigning in all 99 of Iowa's counties, Rick Santorum is finally reaping the benefits of hard work. But there may be more to come, because the particular nature of the Iowa race at the moment could mean much more support will soon come Santorum's way. Here's why:

For months, Iowa social conservatives have searched for a candidate behind whom they could unite in their drive to stop Mitt Romney. But they were never able to come together behind a single choice. They had high hopes for Rick Perry, but he disappointed them with poor debate performances. They had high hopes for Herman Cain, too, but his ill-prepared answers to serious policy questions troubled them. (And that was before any allegations of sexual improprieties on Cain's part.) They had doubts about Michele Bachmann's experience. Finally, they were drawn to Newt Gingrich, but many had a difficult time getting over the former speaker's three marriages.

There was one candidate that nearly all of them wanted to support, and that was Rick Santorum. But they had a problem with Santorum, too. That problem wasn't about knowledge, or experience, or personal history. No, the problem with Santorum was always electability....
Email ThisBlogThis!Share to TwitterShare to FacebookShare to Pinterest