In U.S., Fear of Big Government at Near-Record Level 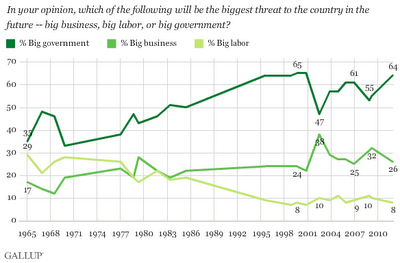 Historically, Americans have always been more concerned about big government than big business or big labor in response to this trend question dating back to 1965. Concerns about big business surged to a high of 38% in 2002, after the large-scale accounting scandals at Enron and WorldCom. An all-time-high 65% of Americans named big government as the greatest threat in 1999 and 2000. Worries about big labor have declined significantly over the years, from a high of 29% in 1965 to the 8% to 11% range over the past decade and a half.

By contrast, 82% of Republicans and 64% of independents today view big government as the biggest threat, slightly higher percentages than Gallup found in 2009.
Email ThisBlogThis!Share to TwitterShare to FacebookShare to Pinterest