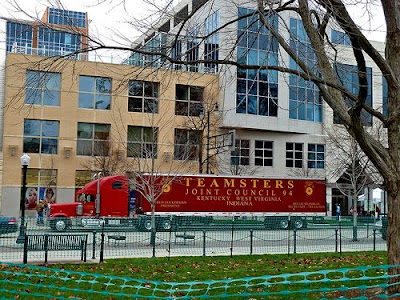 ...Can you look at this picture of a truck parked on the Capitol Square during yesterday's rally and maintain a straight face? It says: "Kentucky/West Virginia/Indiana..."

In an interview with Wisconsin Reporter, Lt. Gov. Rebecca Kleefisch said she worries about what she describes as the distractions of recall campaigns on business investment and expansion.

Kleefisch and Gov. Scott Walker, along with four Republican state senators, are targets of a massive recall campaign, led by the Democratic Party of Wisconsin and the liberal political action committee United Wisconsin.

"Our governor has worked incredibly hard to make sure we have laid the framework for economic prosperity," she said. "We need certainty and stability in the financial climate of the state in order for job creators to invest.

◼ Prediction: Russ Feingold will run against Scott Walker in the recall election - Althouse
Email ThisBlogThis!Share to TwitterShare to FacebookShare to Pinterest