◼ For the past two years, the Obama administration has tried to sell the American public on the notion that its economic policies created a substantial recovery. Friday’s GDP numbers, especially the revisions that impacted results for the past several years, has put an end to that illusion. Derek Thompson at The Atlantic lowers the boom on the supposed Obama recovery - HotAir
◼ GDP Report Shatters Illusion of Jobless, Productivity-Packed Recovery - The Atlantic

Yesterday, analysts thought the economy was expanding by 2.5% a year. This morning, they learned GDP grew by only 1.6% in the last four quarters. This is a remarkable discovery. It's the difference between thinking we're expanding at a decent, if disappointing, pace, and knowing we're growing around half our historical norm.

Analysts also thought, as recently as twelve hours ago, that the economy declined 6.8% and 4.9% in the quarters bisected by Obama's inauguration. It turns out the actual declines were much steeper: 8.9% and 6.7%. 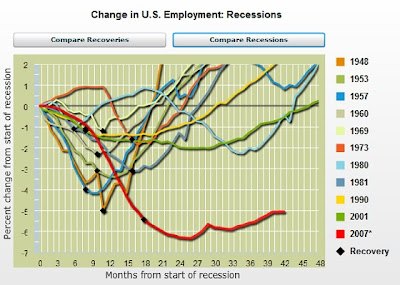